Our hospital is a tertiary referral centre in South Africa that manages up to 8000 high-risk deliveries per year of which 45% of newborns are of low birth weight (< 2500 grams). The neonatal unit has > 100 beds available to care for sick newborns (four wards and eight neonatal intensive care beds) and is mostly at full capacity. Prior to December 2018, we had only seen one case of bacteraemia caused by carbapenem-resistant Klebsiella pneumoniae, which belong to a family of bacteria called Enterobacteriaceae. However, between 1 December 2018 and 2 January 2019 we had four positive blood cultures confirming carbapenem-resistant Enterobacteriaceae (CRE) infection in newborns at our hospital; three newborns survived while one sadly died. Following these CRE infections, we declared a CRE neonatal outbreak on 3 January 2019.

Improved infection prevention and control measures to contain the outbreak

Following our four cases of CRE infections in the neonatal unit, different strategies were implemented to contain the outbreak. CRE can easily spread from patient to patient on the hands of people caring for them and can also survive on hospital surfaces for long periods of time. As we had limited individual isolation facilities available to prevent spread of the Klebsiella or any CRE strains, we cohorted all newborns infected with CRE (with symptoms of an infection and a positive blood culture) or colonised with CRE (positive for CRE on rectal swab but not ill) in cubicles in the wards. Once a neonate became colonised with CRE the assumption was made that the baby could be at risk of becoming ill with an infection by CRE or potentially spread CRE to others for a period of one year. For this reason, we decided not send any of these babies to other facilities (so as not to risk spread of CRE) and to only send them home from our hospital.

We also promptly improved our infection prevention and control (IPC) measures on the neonatal wards. Universal contact precautions (gloves, aprons, closed incubators, and separate hazardous waste bags) were instituted across all the neonatal wards. We initiated a cleaning campaign, specifically enhancing our environmental cleaning methods and implemented standardised methods of cleaning equipment, such as incubators, commonly used in neonatal wards. All health care workers were retrained on IPC principles. Visitors were restricted to parents only.

Despite all the combined strategies to contain the outbreak, sporadic CRE cases still occur, in part, due to our inability to close our neonatal unit for incoming referrals. Due to the few tertiary care neonatal beds available in the province, we continue to have a steady influx of small, ill neonates. At the same time, due to the risk of transfer of CRE and as peripheral hospitals and clinics have no access to colistin, transferring of CRE-colonised neonates from our hospital to other health facilities remains challenging. Given that we always have a 100% bed occupancy, infection prevention control measures are of the utmost importance in preventing neonatal outbreaks. Effective environmental cleaning and standard protocols for the cleaning of equipment will aid transmission risk of infectious pathogens.

What is needed to deal with infections by CRE in the future?

The experience at our hospital confirms the importance of developing effective tools to fight CRE infections in newborns. Older antibiotics could be re-purposed for use against these resistant Gram-negative bacteria after clinical trials for pharmacokinetic and safety parameters to establish effective dosing. Newer antibiotics in the pipeline to combat these infections should be developed for use in babies and to ensure effective treatment against CRE going forward IPC strategies should be developed so that new antibiotics are protected from widespread use and only used when needed. 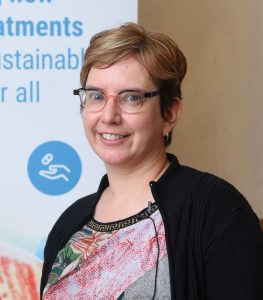 Adrie Bekker is an Associate Professor in Neonatology at the Department of Paediatrics and Child Health, University of Stellenbosch. She received a national research foundation (NRF) C3 rating for her research outputs in the area of neonatal infectious diseases in 2015 and completed her PhD, titled, “Prevention and treatment of perinatal and infant TB in the HIV era” in 2016. Adrie is currently vice-chair on an NIH-funded IMPAACT P1106 study investigating the pharmacokinetics of TB and antiretroviral drugs in low birth weight infants.
She is also collaborating with GARDP on a global observational study of neonatal sepsis.