Recent approvals – do they make a difference? – by Ursula Theuretzbacher

Six new antibiotics have been approved by the U.S. Food and Drug Administration (FDA) over the last four years. So, at a first glance it seems that there is renewed interest in developing new antibiotics against Gram-negative pathogens. Nevertheless, all six antibiotics – ceftolozane/tazobactam, ceftazidime/avibactam, meropenem/vaborbactam, plazomicin, eravacycline, and omadacycline are improved derivatives of well-known antibiotic classes to address class-specific resistance mechanisms. Five of these antibiotics have been developed against infections mainly caused by Gram-negative pathogens, omadacycline, a tetracyline to treat community-acquired bacterial pneumonia and acute skin and skin structure infections being the exception. The most recent approvals, the aminoglycoside derivate plazomicin and the tetracycline derivate eravacycline were approved for the treatment of adults with complicated urinary tract infections (cUTI), including pyelonephritis, and complicated intra-abdominal infections, respectively.

As a member of the scientific committee of the World Health Organization’s (WHO) priority pathogen list for antibacterial drug R&D and as the leading scientist of the WHO’s global clinical pipeline analysis, I am viewing the recent approvals from a societal and public health perspective. The pathogens with the greatest unmet need for new antibacterial drug development globally are Carbapenem-resistant Enterobacteriaceae (CRE), Acinetobacter baumannii, and Pseudomonas aeruginosa. Carbapenem resistance is usually present in the context of either resistance to almost all antibiotic classes (extensively drug-resistant, XDR), or all currently available antibiotics (pan drug-resistant, PDR).

Are the new antibiotics helping to solve the resistance problem caused by these Gram-negative bacteria?

Plazomicin, a new aminoglycoside derivate, caused a lot of attention when it was approved in June 2018. Plazomicin was designed to withstand the most common aminoglycoside modifying enzymes in Enterobacteriaceae. Because of its mechanism of action, plazomicin is not affected by carbapenemases, nevertheless strains harbouring carbapenemases are more prone to carry other resistance mechanisms to many classes of antibiotics. For example, CREs producing non-KPC ß-lactamases often co-carry the genes for 16S rRNA methylases which affect all aminoglycosides including plazomicin and thus, are resistant to the entire class of aminoglycosides. Therefore, this new antibiotic may not work against the most resistant strains in countries with dominance of non-KPC ß-lactamases (e.g. Asia, some European countries). Furthermore, plazomicin has less or insufficient activity against MDR strains of Pseudomonas or Acinetobacter.

The recent approvals of plazomicin and eravacycline exemplify the current situation for clinicians when a new antibiotic becomes available. Its approval may be based on the new expedited approval path and tested in a single phase 3 randomized controlled trial with non-inferiority design and a relatively large non-inferiority margin. Because of feasibility and cost, the pursued indications are usually complicated urinary tract (cUTI) or complicated intra-abdominal infections (cIAI). While these newly approved antibiotics have been designed to solve specific resistance problems, they were clinically tested and initially approved for cUTI or cIAI caused mainly by susceptible pathogens. As expected, they were proven as non-inferior to existing antibiotics. This delivers little new information for clinicians, as these antibiotics were not tested in the difficult to treat, critically ill patient population with diverse infections caused by XDR or PDR Gram-negative bacteria. These patients do exist, but it is extremely difficult to enrol them into randomized controlled clinical trials in an acceptable time frame, as I have experienced first-hand in the completed AIDA trial in a similarly difficult patient population.

Though the new antibiotics provide new effective treatment options for a small sector of selected patients in specific geographic areas, I would like to highlight the ongoing demand for entirely new classes of drugs without cross-resistance to currently used antibiotics. In the meantime, the new treatment options need to be carefully assessed region by region and in individual hospitals, integrated in stewardship strategies, and used wisely according to susceptibility tests to keep their value for as long as possible. 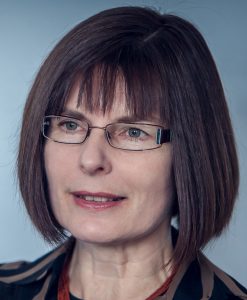 Ursula Theuretzbacher is a microbiologist and expert for antibacterial drug R&D strategies. Her broad therapeutic area expertise includes antibiotic R&D strategies based on public health needs, public funding strategies for antibacterial R&D, and strategies to improve the use of antibiotics. Previously, she was work package leader or partner in several EU-funded international collaborative projects focused on antibacterial drug R&D and reviving of old antibiotics.
Additionally, she served as President of the International Society for Anti-Infective Pharmacology, Founding President of the ESCMID (European Society for Clinical Microbiology and Infectious Diseases) PK/PD of Anti-Infectives Study Group, chairperson of a working group of the International Society of Chemotherapy, and as Executive Committee member of the International Society for Infectious Diseases.
She was member of the coordinating group of the WHO project Priority Pathogen List for R&D and leading scientist for the Clinical Pipeline analysis at WHO. She lectured at the University of Vienna for 10 years and was recently appointed ESCMID Fellow.