A question I’m frequently asked is “with the rise of drug-resistant infections, how does GARDP decide where to focus its efforts”? It’s a reasonable question. And our approach is simple. We consider the priority pathogens identified by World Health Organization (WHO), but also consider the needs and gaps for diseases and key populations when defining which antibiotics to develop. In this way, our efforts focus on global public health priorities and indications less likely to be developed by others.

Back in 2016 when we wrote our first business plan, alongside developing programmes for sexually transmitted infections and newborns with sepsis, we identified paediatrics as a priority population to tackle. Some actors were surprised by our decision to focus on children, believing antimicrobial resistance (AMR) in this population to be a relatively small challenge, mostly affecting poorer countries.

Unfortunately, this is not the case. In Europe – the richest part of the world – we’re now seeing morbidity disproportionately impacting the youngest children. A recent paper in The Lancet Infectious Diseases shows drug-resistant infections are responsible for an estimated 2300 disability-adjusted-life-years per 100,000 people every year. This burden is highest in infants under one, and has increased significantly since 2007.1

Even though significant progress has been made in recent years to improve child health globally, including a 50 percent reduction in child mortality since 1990, the number of preventable deaths in newborns remains unacceptably high. Neonatal deaths now represent 44 percent of all deaths in children under the age of five2. And of great concern, is the estimated 214,000 deaths in newborns attributable to drug-resistant infections3. If we don’t prioritize paediatric care, we are letting babies and children die.

My own clinical experience, including working sub-Saharan Africa, has taught me that babies and young children are extremely complicated to look after. They get sick fast and deteriorate rapidly. In my current role, I see first-hand how children are not always appropriately prioritised when it comes to developing new drugs.

To this end, it’s important that funders and policy-makers think differently about AMR. We need to start thinking about AMR in terms of who is impacted and how we can reduce morbidity and mortality. At the moment there is some disconnect between developing drugs and ensuring they can be used by a significant and/or vulnerable part of the population. How useful is a drug for a serious bacterial infection that cannot be used for children? This is an important question to consider in the ongoing discussions around universal health coverage, and of course critical if we are to tackle AMR as a threat to achieving the Sustainable Development Goals.

Children are not small adults and require treatments that are adapted in terms of regimen, dose and formulation. Researchers need to be thinking about as early as possible -developing and executing paediatric plans and studies that have been requested by regulators in an attempt to accelerate paediatric development. At GARDP, we welcome the opportunity to collaborate with researchers and companies to accelerate the development of potential candidates once they go into clinical development. If we are to develop treatments for this population, we have to start thinking about factors such as normalizing clinical trials in children. We need to be driven by whether a drug meets its objective as well as an unmet need and not be so focused on whether a drug is new or old.

Our ambitions in the paediatric space are to develop and implement paediatric investigation plans of new and important old antibiotics in partnerships with companies. In parallel, we are connecting with and building upon existing networks to conduct clinical trials, including developing trial designs and master protocols. All this, of course, while considering access and appropriate use.

It’s important to ensure our priorities address the most vulnerable and we keep them at the heart of our efforts to tackle drug-resistant infections. While AMR can affect anyone, of any age, in any country, it is disproportionately impacting children and few actors are addressing this with a global focus. That’s why we are. 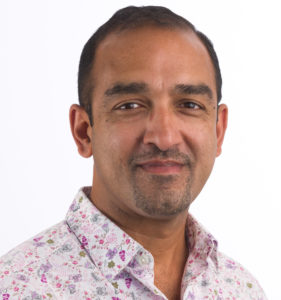 Manica Balasegaram trained as a medical doctor at the University of Nottingham, UK from where he started his career in internal and emergency medicine. From 2001 onwards, he worked as a doctor and researcher in several countries in Sub- Saharan Africa and Southern Asia. He also gained significant experience working in humanitarian emergencies and responses, largely with Médecins sans Frontières (MSF).
At the end of 2007 he joined the Drugs for Neglected Diseases initiative as Head of Leishmaniasis Clinical Program – a position he held for four years before returning to MSF as Executive Director of their Access Campaign. He was appointed director of GARDP in June 2016. He is also currently a board member of the Medicines Patent Pool as well as of FIND’s Scientific Advisory Committee.
Manica’s experience spans clinical and public health practice in infectious diseases, international work on health policy & access to medicines where he has served on numerous international technical and health policy panels and experts groups. He also has substantial experience in clinical trials and drug development working as a site investigator, principal investigator, and project manager.