The REPAIR Impact Fund: Reflections from the first year – by Aleks Engel

Antimicrobial resistance (AMR) is a massive and growing concern worldwide. What can stop it? It is a complex and far-reaching problem with no easy answers, but we are trying to take important first steps. The REPAIR Impact Fund was launched on the 28th of February 2018. With the first year behind us, I reflect on some surprising lessons learned, thoughts about the future, and finally a more personal perspective.

As one of the largest dedicated for-profit life science investors, we at Novo Holdings saw ourselves uniquely positioned to invest in anti-infectives – an area out of favor with other investors and with a massively growing unmet medical need, which stems largely from AMR. The REPAIR Impact Fund was launched to help fill a critical gap in early-stage equity funding for anti-infective therapies, specifically between the beginning of lead optimization and the end of phase 1. This is where we identified the greatest amount of innovative science.

The first lesson learned from this initial year is how financially devastated the market for anti-infectives has become – both from a revenue generation perspective and from an investment perspective. A year ago, we saw an incredibly depressed market, but expected that it could not get much worse. Since the launch, the share prices of the 13 existing publicly-traded anti-infective-focused biotech companies have fallen by more than 60% (from an already depressed starting point) and Allergan, Novartis, and Sanofi have exited the space. Reflecting a similar pattern, two of the four investments we made in 2018 were to support early-stage projects in publicly-traded Polyphor and Entasis, and the value of our shares have fallen by half while the projects have performed exactly according to plan. The share prices of other companies have decreased even more.

My greatest fear for the short term is not the lack of novel anti-infectives reaching the market this year, but the attrition of talent.

Despite harsh realizations about these horrible market economics, which are most striking in light of the general biotech bonanza happening in almost every therapy area, we have uncovered an important second lesson – namely that amazing scientists and business leaders have dedicated their lives to making a difference towards AMR. These people are technically brilliant, and also have a camaraderie of a group having experienced common hardship. There is real talent here, including remarkable individuals who know both how to invent new therapies and how to get them to market. My greatest fear for the short term is not the lack of novel anti-infectives reaching the market this year, but the attrition of talent.

I am a firm believer that good things will happen when the cutting-edge novel therapies that we see in the early stage pipeline today hit the increased unmet need of the market in 4-7 years. Unfortunately, I am doubtful about the commercial prospects of the less differentiated late-stage anti-infective pipeline right now, and thus the market decline may continue for another few years. We NEED to survive this delay AND we need help, and we need it quickly.

There are many reasons to be optimistic, however. First and foremost is innovative science. Our understanding and ability to manipulate biology may, in fact, be increasing faster than the emergence and spread of resistance mechanisms. In other words, we may be ‘smarter’ than bacteria. We have a long way to go, but many new solutions exist – somewhere in the combination of new chemical entities (e.g., small molecules and antibodies), genetically modified phages, tailored anti-virulence factors, vaccines, an intricate understanding of the inner workings of the bacteria, and a deep-learning approach to direct therapy development (using large genotype and phenotype datasets). On the political front, there are also rays of hope: the UK recently announced that the NHS will trial a new value-based payment model for antibiotics and the US FDA are seriously talking about a subscription model, which is already being implemented for HCV drugs in certain US states.

What AMR means to me

Lastly, leading the REPAIR Impact Fund for this first year has been one of the most meaningful things I have ever done. So many people have bent over backwards to support the fund and help me personally in my efforts. I am truly grateful for the phenomenal advice I have received along the way – with respect to the science (I’m not a microbiologist but a biochemical engineer-turned-investment leader), likely regulatory hurdles, politics, impact investing, and lastly and most importantly, opportunities for strategic collaboration with other funders (both grant-giving funders such as CARB-X and the few venture capital funds still considering investments).

I am hopeful that in 25 years, we will look back at the AMR crisis as a case study for how to address pressing global challenges such as climate change.

In 2002 my dad was diagnosed with endocarditis, and it nearly killed him. The bacteria were resistant to aminoglycosides and were destroying his heart valves. Luckily, vancomycin still worked. He is now 80 years old and thriving on our family farm in Denmark. Unfortunately, losing a loved one to a bacterial infection is something that we have good reason to fear in years to come. We are at a critical crossroads now where we must summon the political will and corral our scientific skills to overcome antimicrobial resistance. For me, this is also personal.

I am hopeful that in 25 years, we will look back at the AMR crisis as a case study for how to address pressing global challenges such as climate change. The combination of a public groundswell of people demanding a solution, a huge diverse array of scientific endeavors and advances, and political leadership is the recipe. I am optimistic and energized. 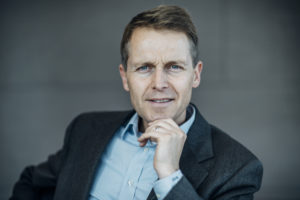 Aleks Engel is a Partner with Novo Holdings A/S based out of Copenhagen. He is also the Director of the REPAIR Impact Fund. Prior to joining Novo Holdings, Aleks was employed as a Vice President with Baxter International in Illinois and Shanghai, working with global M&A licensing, growth strategies, investment prioritization and go-to-market planning. Other previous employments include Pfizer Global Research and Development, and McKinsey & Company (all U.S.A.). Aleks holds a Ph.D. in Biochemical Engineering (1999) and a M.Sc. in Chemical Engineering Practice (1995) from Massachusetts Institute of Technology.

Novo Holdings established the REPAIR Impact Fund commissioned by the Novo Nordisk Foundation in February 2018 with a total budget of USD 165 million to invest in companies involved in discovering and the early-stage development of therapies targeting resistant microorganisms.
The fund is expected to invest USD 20 million to 40 million per year over 3–5 years in about 20 projects in Europe and the United States, which is anticipated to yield at least one new therapy reaching the market.
The REPAIR Impact Fund will invest in start-ups, early-stage companies and corporate spin-outs in Europe and the United States.